As iT networks grow in complexity, we’re focused on keeping iT security simple and to the point. We know that a proper and reliable security strategy must include networks, servers and devices – all devices. 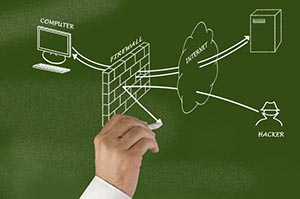 A firewall is a barrier or shield that is intended to protect your firm’s computer network. Data is exchanged between your computer, servers and routers and firewalls monitor this data (sent in packets) to check whether they’re safe or not.

This is done by establishing whether the packets meet the rules that have been set up. Based on these rules, packets of data are accepted, or rejected.

While most operating systems (desktop and mobile) feature a basic built-in firewall, the best results can usually be gained from using a dedicated firewall application, unless you know how to set up the built-in firewall properly and have the time to do so.

Be prepared for anything – you can be attacked from anywhere, at any time. The volume and severity of cyber threats keep increasing almost exponentially, and hackers are constantly evolving. Don’t worry – so are we.

For as long as computers have been and will be in existence, whether connected to the Internet or not, there will always be a need for antivirus software. There will never be a time when people, will stop looking to find ways to commit fraud, cause widespread damage, or just experience the rush of breaking into a computer.

Antivirus software is an important tool to help prevent such attacks. Not every type of cyber attack can be prevented with antivirus software, but it can be a great asset when trying to prevent intrusion into a computer.

Although not every intrusion into a computer is meant to cause damage or steal valuable information, that doesn’t mean that the attack isn’t dangerous. Once even the most innocuous of an intrusion exploits a vulnerability, it basically sends a signal to others that this computer has been infiltrated. This opens the door wide to much worse attacks.

Business iT Solutions has the following vacancy for an IT Technician

Position: Junior IT Technician
Location: Windhoek
Requirements: Experience in the field of ICT (driver's license would be of advantage)
Languages: English (Afrikaans and German would be helpful)
Nationality: Namibian


If interested, send us an e-mail to jobs@bits-cc.com and request further information.